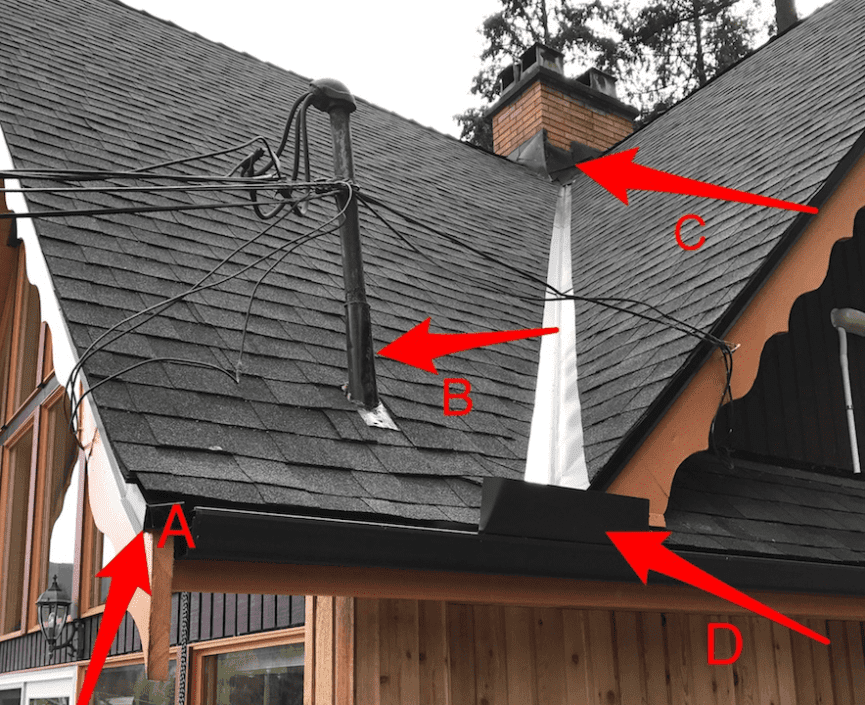 Owning and maintaining a home these days has become an expensive proposition to say the least. That’s why a lot of people who require renovations or repairs of any kind are always on the lookout for ways to save money. In some cases, this may mean taking a DIY approach to household projects, or simply hiring the least expensive contractor available to complete the job. While this may save you a few bucks at first, hiring anyone other than a certified professional with a proven track record of solid workmanship will likely cost you more money and a lot more of your sanity in the near future, but you don’t have to take our word for it. With nearly 20 years of experience in the roofing industry, the professionals at Coast Mountain Roof have seen and repaired countless examples of poor and careless workmanship completed by inexperienced and unqualified contractors. Below is just one of many examples of the major issues you may end up having to repair if you don’t hire a professional.

Having worked in the roofing industry for almost 20 years, we really thought we had seen all kinds of issues caused by incompetent workmanship, but this latest example absolutely shocked our team of professional roofers. With only a single look at the roof of this Vancouver area home, we were able to spot multiple issues that were not only an eyesore, but had already caused damage to the integrity of the roof. Fortunately, our team of certified roofing experts were able to rectify each issue, but this came at an additional cost to the homeowner, which could have been avoided if they had simply hired a professional roofer from the start.

We’ve labeled the issues from A to D on the images:

Issue #A: Coming Up Short 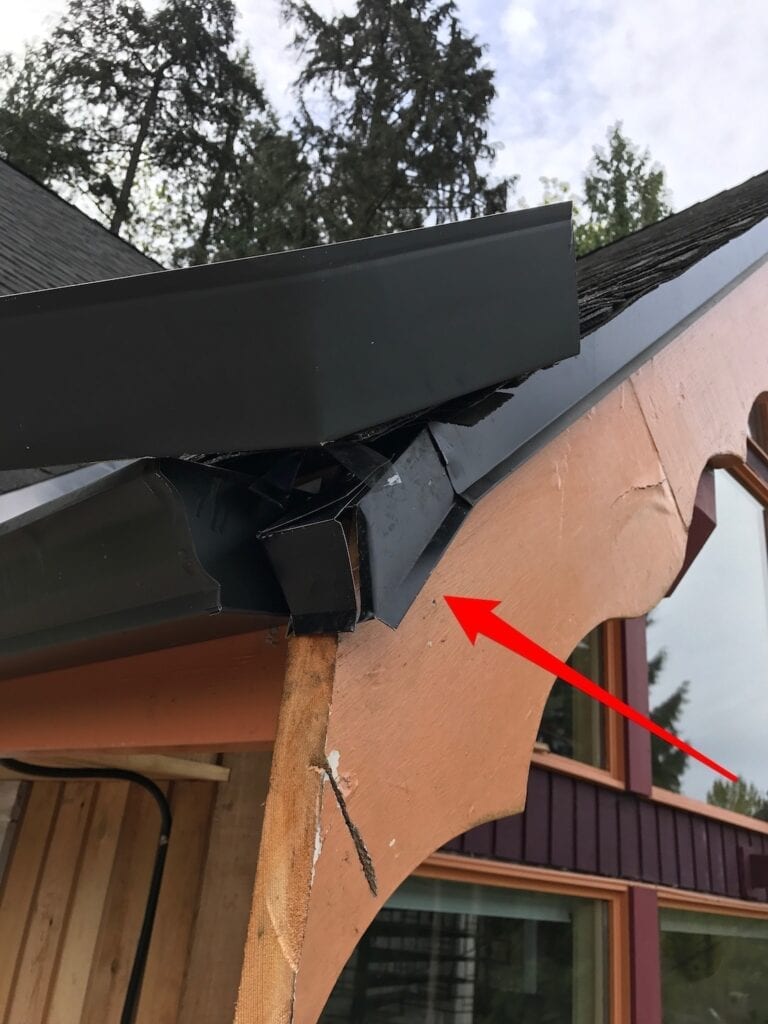 Right away our team noticed the original repairs to the drip edge flashing were completed with a metal piece that was cut too short for the section that was in need of repair. Instead of cutting a new piece of flashing to the correct 10′ size, it is clear that the contractor chose to save his own time and money budgeted for materials by simply sliding an additional piece of flashing into place to tie it all together. Not only does this look bad, it can also cause water to gather under the shingles instead of draining off the roof properly. We were actually shocked when we found this, but unfortunately for the homeowner, the unwelcome surprises on their roof didn’t end there. 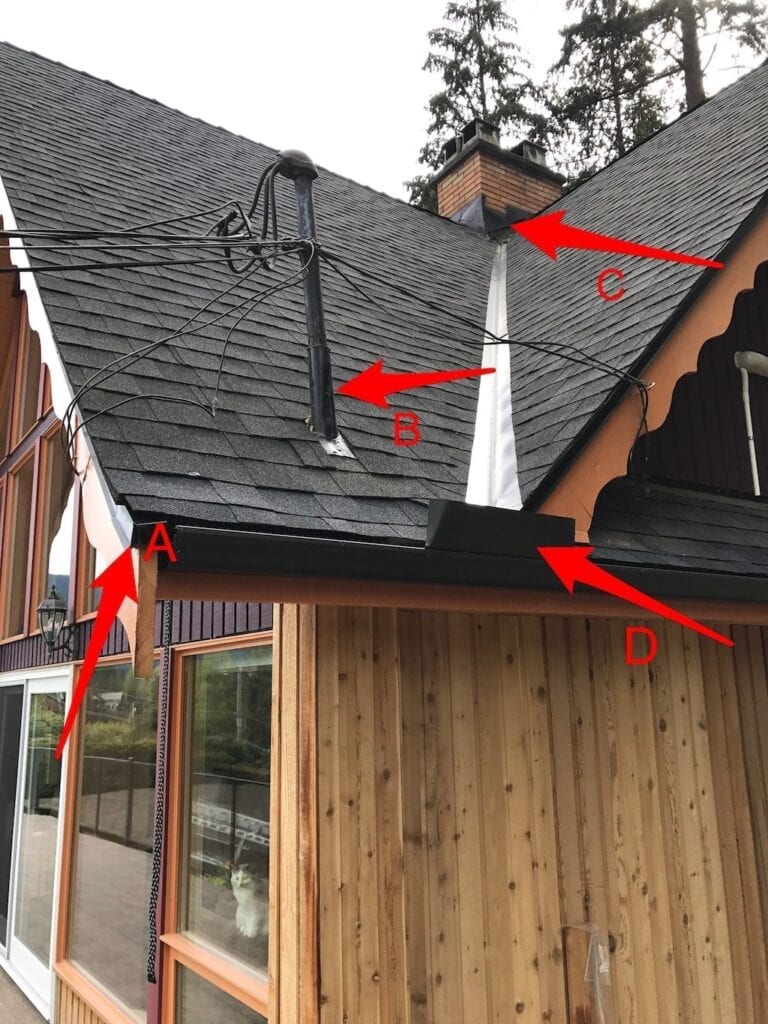 Just because you can reuse existing material on a repair job rarely means that you should. We discovered another issue with these so called repairs when we took a look at the base of the electrical mast and found that the contractor hadn’t even bothered to replace the old metal flashing. Since the inflexible metal flashing was never replaced with a proper rubber boot, the roof actually sprung a leak when tension was put on the electrical wire. Had the repairs been completed by a competent roofer who wasn’t trying to cut corners, a rubber boot with a stainless steel zipper lock would’ve been installed. This would have prevented a leak caused by tension on the electrical wire from ever occurring, due to the flexibility of the rubber.

After discussing the original requests made by the homeowner, we learned that they were promised a new counter flashing at the base of the chimney. At a glance we discovered that the original contractor didn’t even bother to replace the old material, and simply spray painted the worn out flashing to match the colour of the new flashing. Dishonesty like this on the job is just as bad as outright stealing. Any professional who values his reputation as well as his own integrity would never jeopardize his business by making such an underhanded move on any project.

The final major issue we encountered with this catastrophic workmanship was caused once again by laziness and inattention to detail. Its no secret that Vancouver and the surrounding area gets a fair amount of regular precipitation, which is why some houses in particularly wet areas require larger gutters to be installed. This homeowner had originally asked for a 6” commercial gutter to be installed, but due to the incompetence of the contractor that was originally hired, a standard 5” gutter was installed. The problem was exacerbated when the original contractor decided to add metal shields at certain points on the gutter to prevent the overflow of water. These shields were not only ineffective and unnecessary, they looked horrible and completely out of place. A professional roofer not only would have been sure to arrive prepared with the correct 6” gutter, but would also have the foresight to install a liquid membrane with granules on the valley running down to the gutter that would slow the flow of water and prevent it from spilling over the gutter at any point.

Problems like these can not only cause damage to your roof, but can also cause you to end up spending way more money than you ever expected. As we said before, owning and maintaining your own property is expensive enough, which is why you should always be sure to hire a trusted roof professional to complete any commercial or residential repairs or renovations, no matter how simple they may seem.

Brad Gordon and his team of professionals have been installing roofing, waterproofing and architectural sheet metal systems in the Greater Vancouver area for over 20 years.